So, as you sit in your office and look around, are you a clean desk person or a messy desk person. What does one or the other say about you? 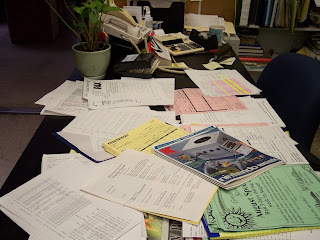 Researchers have, in the past, studied how certain personality traits affect health choices in people. Not surprisingly, they found that people who tend to be more organized and predictable, typically eat better and live longer than people who were less orderly. They also tend to have very clean offices and desks.

However, what has been less clear is whether or not clean work environments can create good habits, even in those who aren't necessarily as organized as others around them. In a study done by Dr. Kathleen Vohs and the University of Minnesota, Carlson School of Management, researchers decided to find this out.

In their first study, they randomly assigned college-age students to spend time in office spaces. One was very neat, the other cluttered with papers and other work related materials. The students spent their time filling out questionnaires totally unrelated to the actual study at hand. After 10 minutes, they were told they could leave and were offered an apple or a bar of chocolate as they left. The students who sat in the orderly office were twice as apt to choose the apple, then those who sat in the messy office.

In their second study, they found that working in chaos may have its own advantages, however. In this one, college students were placed in messy or neat offices and asked to dream up new uses for Ping-Pong balls. Those in the messy offices generated significantly more creative ideas, according to two independent judges, than those coming up with ideas in offices that were neatly organized.

According to Dr. Vohs, a behavioral scientist at the University of Minnesota and the leader of the study, the results were a surprise. In previous similar studies, few found much virtue in disarray. The broken-windows theory, from decades ago, stated that even slight disorder and neglect can encourage poor discipline and nonchalance. Chaos begets chaos. But, Dr. Vohs' study showed the disorderly offices promoted originality in her participants.

In the final portion of the study, adults were given the choice of adding a healthy "boost" to their lunchtime smoothie that was labeled either "new" or "classic." Those in the messy space were far more likely to choose the new one, while those in the clean space were more likely to go for the classic one.

Dr. Vohs and her co-authors concluded that, "disorderly environments seem to inspire breaking free of tradition, which can produce fresh insights."

So, perhaps if you need to think "outside of the box," you should let the clutter rise and open up your mind to new possibilities and ideas. But, if your primary goal is to establish order and routines, eat well and exercise regularly, you may want to clean up that office.

So, what if you need to do both? Well, perhaps you could use or create a second space to work in. Maybe a conference room, or even two different desks in one office, or your desk and small table in another corner for tasks. Then depending on whether your goal is to get those creative juices flowing, or organization, use the appropriate space for that given task. Who says you have to pick one or the other?
at 1:56 PM