How To Detect Counterfeit Money

Counterfeit bill passing costs businesses millions of dollars in lost revenue every year. Those businesses that fail to carefully examine the bills that are passed on to them are victimized daily. Don't let the counterfeiters get the best of you and your business. Learn how to spot counterfeit money and stop the thieves in their tracks.

You can help combat the threat of counterfeiters by becoming more familiar with United States currency. Examine the money your business receives. Train your employees in how to spot fake bills. Compare suspicious notes with genuine ones of the same denomination and series, paying attention to the quality of printing and paper characteristics. Don't look for similarities – instead look for differences.

There are a variety of things to look for when examining money for counterfeit bills.

Portrait
A genuine portrait on a bill appears lifelike and stands out distinctly form the background. A counterfeit portrait is usually flat and lifeless. Details merge into the background, which is often too dark or mottled.

Border
The fine lines in the border of a real bill are clear and unbroken. On the counterfeit, the lines in the outer margin and scrollwork may appear blurred and not distinct.

Paper
Genuine current paper has tiny blue and red fibers embedded into it. Often counterfeiters will try to simulate these fibers by printing tiny blue and red lines on their paper. But on close inspection, one may see that on the counterfeit notes the lines are printed on the surface, not embedded in the paper. It is illegal to reproduce the distinctive paper that is used in the manufacturing of U.S. currency.

But, if your business deals with lots of cash, it is often impossible to stay on top of the counterfeits all of the time. This is where counterfeit detectors come into the picture. Counterfeit detecting machines are specialized pieces of equipment that are used to spot fake money.

The price ranges on counterfeit detectors runs the gamut, from very cheap to very expensive. You are paying for the technology that is embedded in the machine model that you choose. Obviously, the more sophisticated machines, with several modes of detection, will cost more than a simple tabletop non-electric model.


For instance, a lower end model will often come with UV counterfeit detection. They carry the smallest footprint, which means they don't require a lot of counter space, offer the lowest cost in the fake money detector market, and include many models that don't require a power outlet to run. You simply turn the machine on, swipe the bill, and the detector checks to see if UV is detected. No training and no hassle searching for a UV security thread is needed. These machines take the place of the older method of using a counterfeit pen to detect frauds. 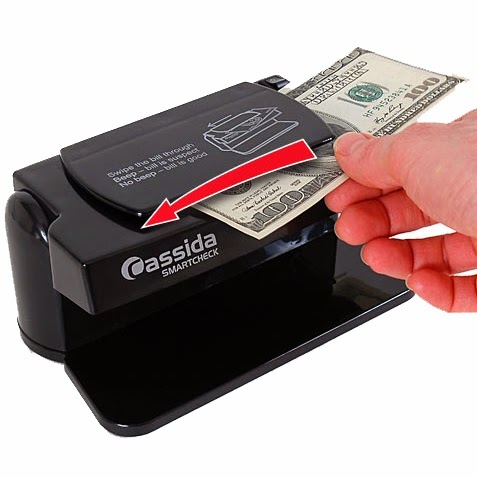 A machine that falls in this market space would be something along the lines of the Cassida SmartCheck Counterfeit Detector with UV Detection. You could step it up a notch and move up to the Cassida M-18 Counterfeit Detector, which offers UV and watermark detection, or the Royal Sovereign RCD-3 Plus or the Money Lab HTC-40, which check for UV, magnetic, and watermarks. The economical counterfeit detectors in this category are going to run anywhere from about $39 to $50 in price. 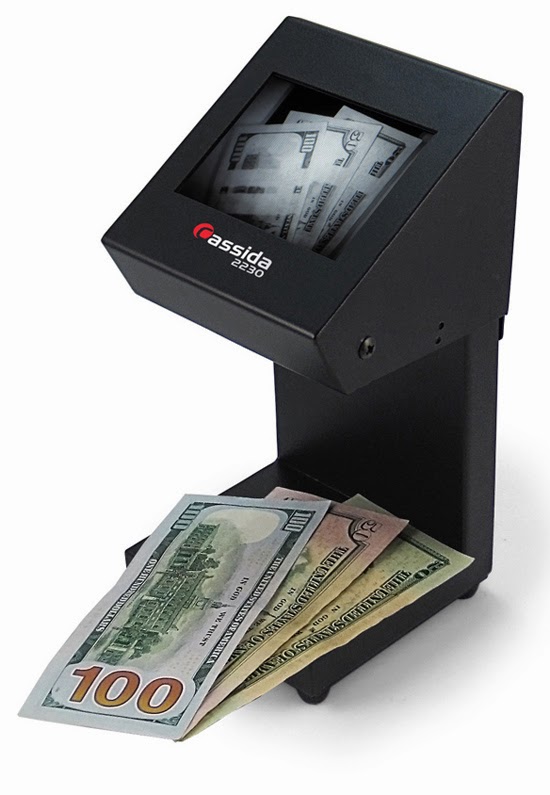 A mid-range solution, generally running between $150 and $200, would be a machine such as the Cassida 2230 Infrared Counterfeit Detector. This type of machine uses powerful IR technology to authenticate security features present in currency. IR cannot be seen with the naked eye, which makes this a more advanced method for checking for counterfeit bills. Though still lightweight and easily portable, should the need arise, it does require power source (electrical outlet) to operate and is therefore meant to be a more permanent addition behind the counter than a lower end model.

A higher-end range, although still economical for a business that deals with lots of cash, would be something like the Cassida 3300 Automatic Counterfeit Bill Detector. This stand-alone counterfeit detector features several authentication methods, including UV, spectrum analysis, and infrared. On top of detecting counterfeits, it also features an automatic feed and large LCD screen, and has a distinct audible alert when it detects a counterfeit bill.

So, just how accurate are these machines? Well, no machine is guaranteed to catch fake bills 100% of the time, and the manufacturers never make the claim that they do. The technology for creating counterfeit bills gets better with each passing year. However, they do a fairly decent job of catching the majority of the bills that are passed and many of the higher end models are upgradable, via a software update, as needed. Obviously for the best detection, you are going to want a higher end machine with more features. 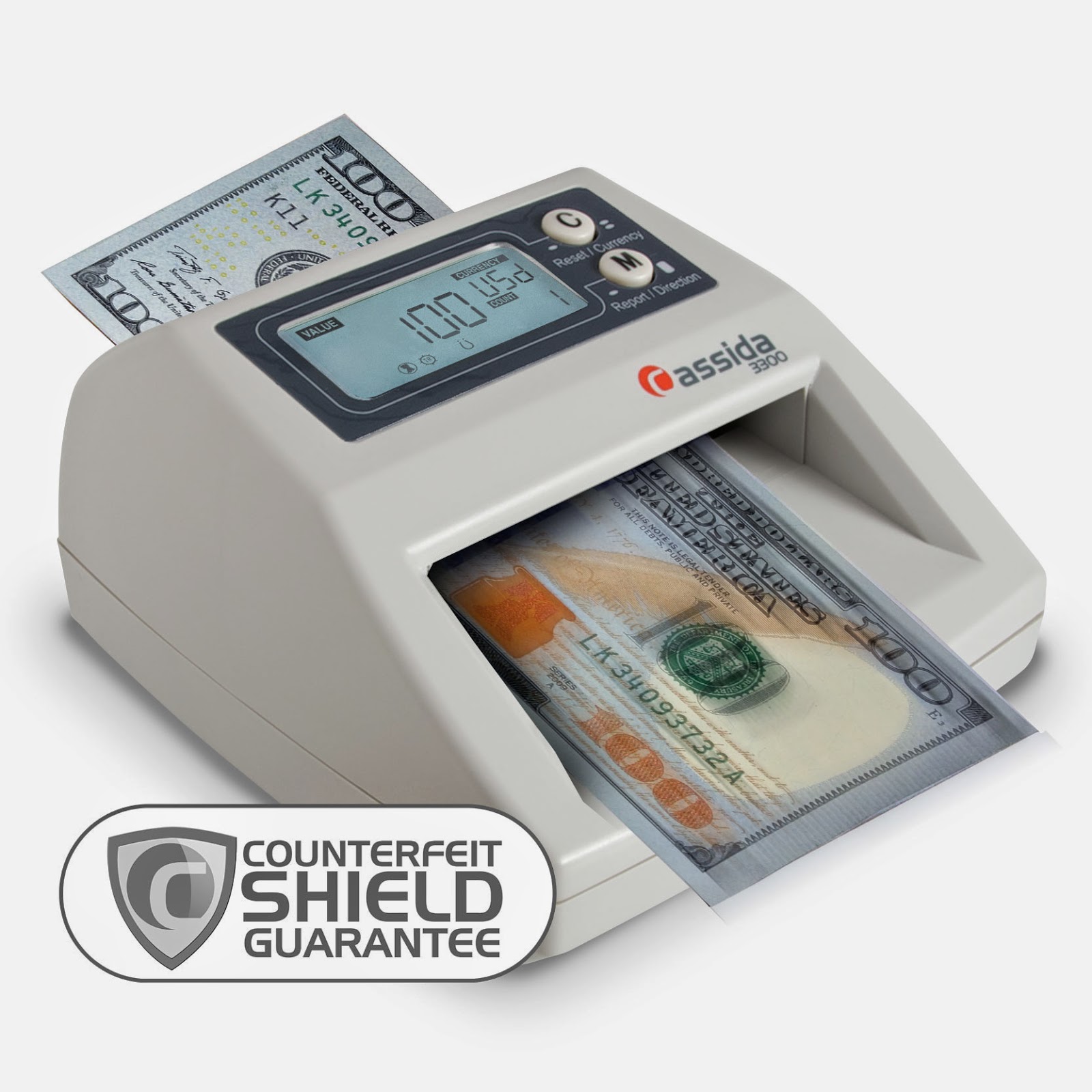 The Cassida 3300 does come with a unique offer from the manufacturer, however. It includes the exclusive Cassida Counterfeit Shield Guarantee. They have such faith in this piece of equipment, they are offering buyers who register their machine with them within 30 days of purchase this guarantee, which allows you to reclaim the full face value of a counterfeit bill should your Cassida 3300 accept it as genuine. This is an offer that can't be beat if you deal with a lot of cash in your business! (Terms and conditions apply.) No other manufacturer offers such a guarantee at this time, which makes it unique and worth the price of the jump into this model.

Counterfeiters get better and better, with each passing year, at what they do. And, they have not been afraid to adopt the new technology available to them to do their dirty work. Luckily technology has also made it much easier for the business person to protect themselves from these thieves.

Know your money. Teach your employees about money. Protect yourself with the technological tools available to you. Let's stop them in their tracks!
at 9:33 PM